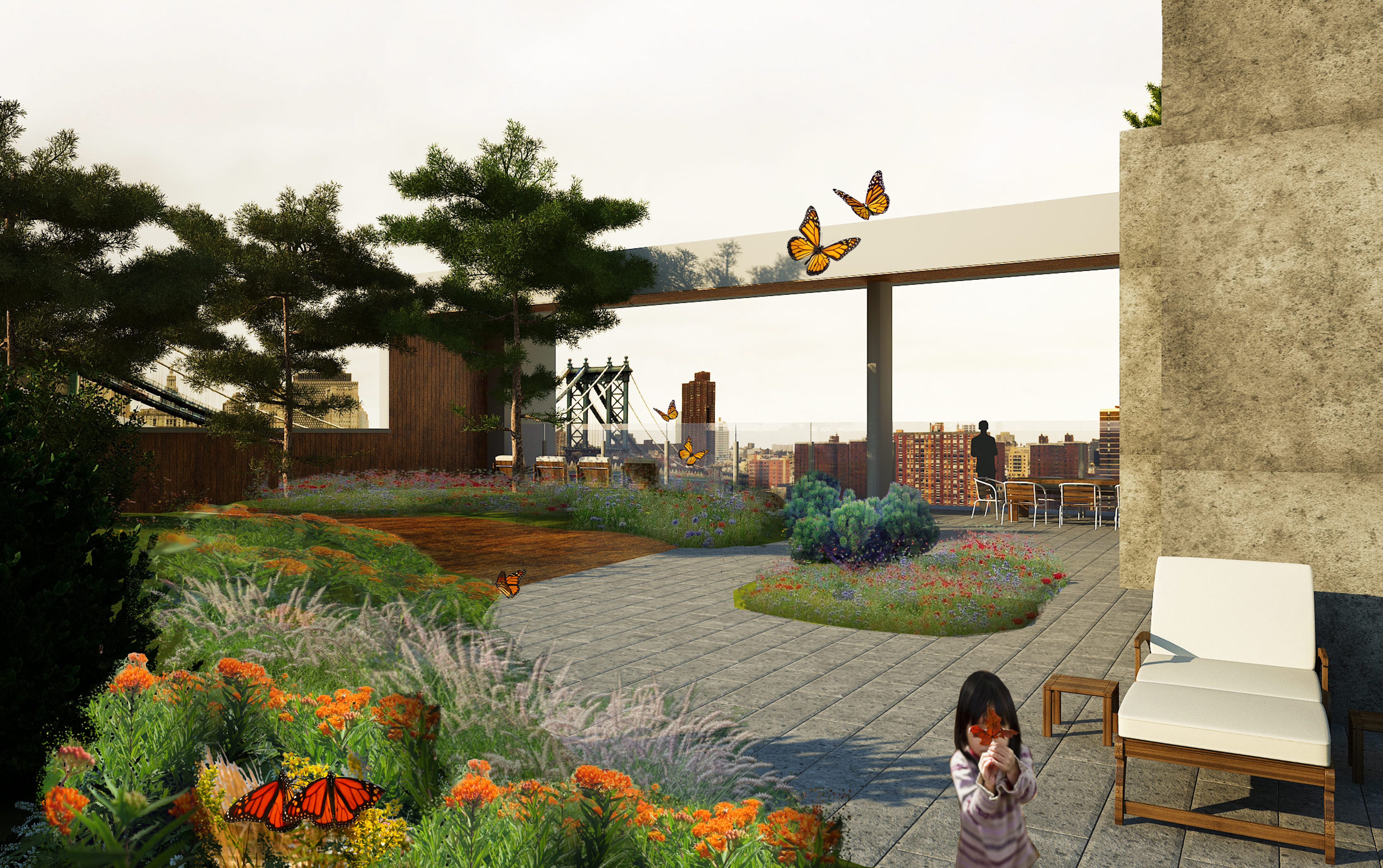 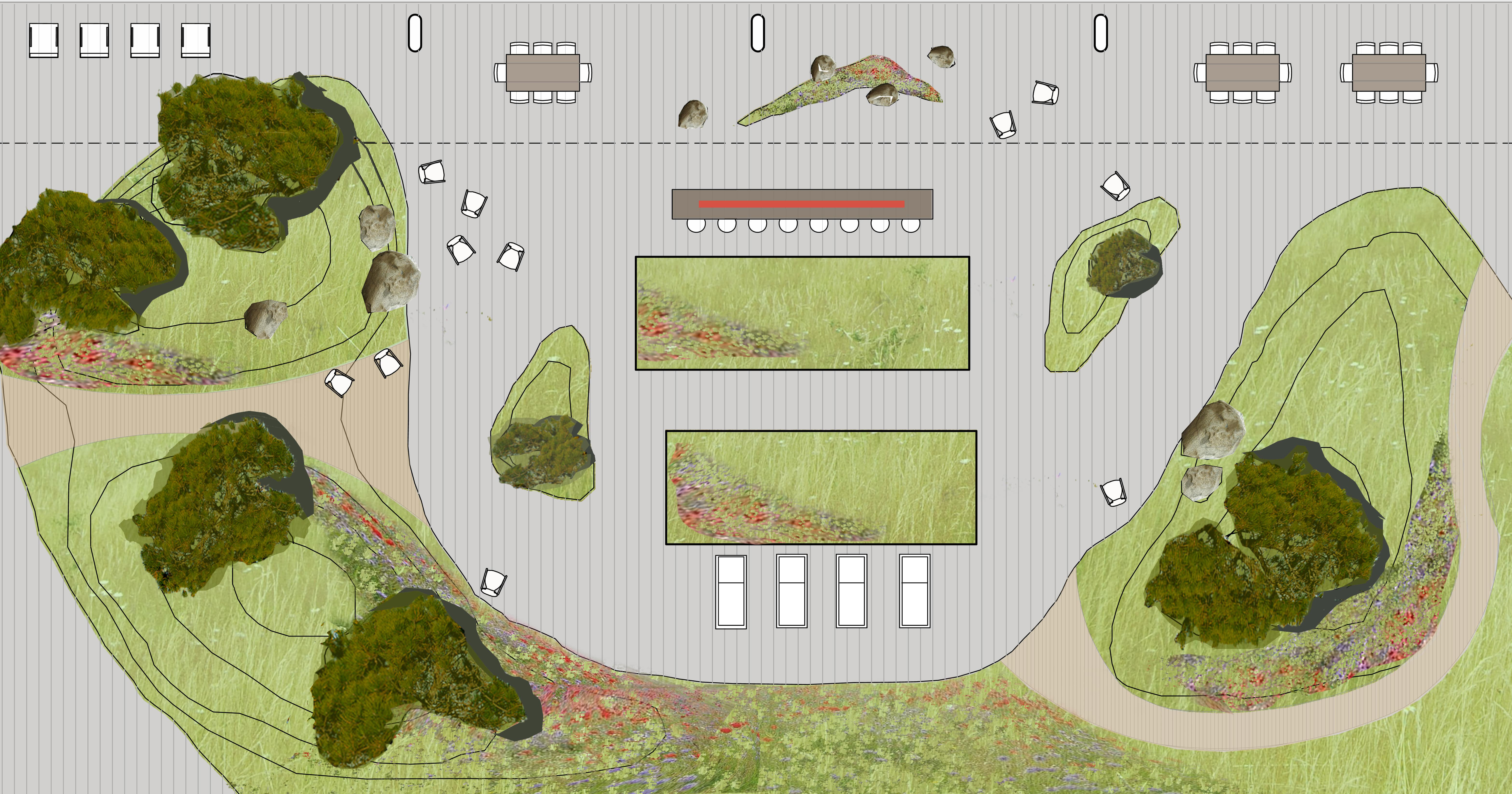 John Street is a design competition for a new residential building located on the East River in DUMBO, Brooklyn. Our proposal is a rooftop garden, composed of mounded alpine meadows and wind-swept pines. It is a place for families, friends and individuals to sit, relax and watch the clouds pass overhead.  The amenities on the roof garden include boardwalks through the native meadow and sculptural trees, chaise lounges, movable chairs, an iconic communal grill counter and over-sized dining tables.

The topography and planting is designed to mitigate the sound and pollutants of the bridge traffic, offer protection from wind and sun, and frame views of the City skyline. The landscape introduces a wilder nature that exists beyond the New York City limits.  Residents will find displays of low bush blueberry, bearberry, sedges and goldenrods indigenous to the Appalachian mountains. This native palette of green roof plants cultivates a a self-fertilizing environment that connects into a system of habitat patches throughout the City. These patches are an important food source that migrating bird, butterfly and bee species depend on as they journey through the City.

The inside adventure park will articulate the Brooklyn Bridge Park’s themes of habitat restoration and ecological systems. Designed to be accessible to children of all ages, it will extend the language and activity of the larger park into the building.

Visitors to Brooklyn Bridge Park will have the opportunity to seamlessly move between exterior and interior park spaces, taking advantage of the building as a public asset providing year round shelter and amenities. The character of the riparian edge present within the park will be carried into the building.  The indoor park will be an experiential cross section of the riparian edge, arguably the most important part of our ecosystem.  The first and second floor of the building will be transformed into the canopy, edge, and underwater habitats commonly found along stream banks and riverbeds in the New York Bay.

Built with soft mounds and faux grass berms, a safe and dynamic rivers edge is created for children to run, roll, balance and build.  Imagery and sound cues reinforce aspects present at the water’s edge.  Pressure activated pads in the ground create native riparian animal sounds when childern hop and run across them.  Flexiable faux willow branch hoops will be provided to make tunnels and structures.

To the East of the Riverbed kids will find a set of twisting and intertwining Oyster Shoots (slides) that plunge them deep into the cavernous depths of the bay. The slides terminate into a bed of faux pearls!  Light streams in from above as it would in a natural cave beneath the river. And then they climb back up to the surface on the second floor.  This double hieght space in the NE corner of the buildings holds the two spiral slides.  They take children from the second floor and release them one story below into a large ball pit, themed on the Hudson estuary oyster beds.  A glass wall will let in soft north light and natural cleft stone will clad the eastern wall.  The stone wall will be a two story water and green wall.  It will emulate the surface of an underwater cave and transition down into the contours of the oyster reef. The rock face will extend into the lower room and become a soft wall surrounding the ball pit and subterranean adventure room, with walls built for low traverse climbing.

A climbing structure in the form of an enormous tree will be built from wood and steel. Children will be able to enter the tree’s cavity, climb its trunk and onto its branches.  Shoots will allow children to slide into Alice in Wonderland rabbit holes and reappear down by the rivers edge play area.  The ceiling will support climbing ropes and swings in the shape of spun nests that will raise and lower on weighted pullies as other children climb on and off the swings.

Children can run up a soft curving ramp to a forest’s upper canopy where kids are immersed in the textures, sounds and perspective that accompany life in the trees. They can weave in and out of cavities in the trunk of the central tree, while they make their way up to perches on higher branches and swing on monkey bars and ropes between them. Swings reminiscent of nests hang from the ceiling and float amongst the canopy, while long knotted ropes aid in the ascent to the highest levels of the structure. The Climbing Canopy is designed to encourage free play and intense imagination. The songs of chickadees, nuthatches, eastern bluebirds and woodpeckers float on the air to feed our inherent fascination with the sounds.